What an amazing first year it was for ECDSA, who would of thought that in our first year of being formed that our football club would get promoted back into the football league beating Torquay United in the Play-offs along the way and our chairman being voted ECFC ‘Supporter of the Year‘ and just goes to show what disabled people can achieve. 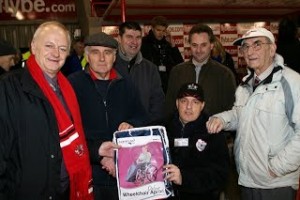 We handed over five sets of waterproofs for our disabled supporters to Dacre Holloway – ECFC Stadium Manager,
the waterproofs were kindly donated by one of our 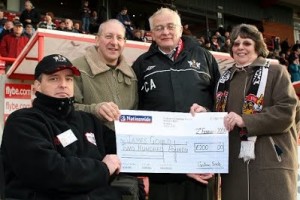 ECDSA with help from the James Gould Trust had a bucket collection and collected a grand total of £398.88 and we presented James’ dad Ian Gould with a cheque for £200.

The James Gould Trust was set up after James aged just 17, was involved in a pool accident which has left him paralysed from the chest down.

The Seminar was held at Wembley Stadium and was jointly funded by The FA and Wembley Stadium Ltd on behalf of the Premier League, Football League and Football Conference in partnership with NADS – The National Association of Disabled Supporters.

The seminar was a great opportunity for all those involved in disability equality in the professional clubs to have a chance to meet and share examples of best practices and to identify ways in which disabled people can be supported by clubs and the authorities in the future. The audience was mainly made up of Club Disability Liaison Officers, NADS members and representatives from the various Disabled Supporters Associations around the country, myself and Colin Atkins – ECDSA vice-chairman were there to represent Exeter City Football Club and Exeter City Disabled Supporters Association.

During the day NADS launched their level playing field campaign for 2008 which this year will be focusing on sensory impairments and their 2007 state of the game report, we also heard from Eleanor Ellison of the RNIB on their Soccer Sight project and within her presentation she told everyone about the fantastic work being done at Exeter City FC which was mainly being run by volunteers and of the great work the club was doing to help all disabled supporters and that the Soccer Sight project was being launched soon at Exeter City FC.

A number of clubs shared their best practices which included Liverpool, Wycombe Wanderers and Manchester City.

Delegates were able to highlight areas of ongoing concerns, which fell into two broad categories. First it was evident that there is often a disparity in ticket allocation between disabled and able bodied fans. The second area was that of the inequality of facilities that are on offer at football grounds across the country.

We urge all those with experiences of any disability issues within football, good or bad to contact us with your views.

Finally, it was a very worthwhile day and it’s great that Exeter City FC are being respected by other clubs, this is all down to the fantastic work all our volunteers and staff do and it’s what everyone fully deserves.

Monday 10th March we were invited to a Disabled Young People event in Mid Devon which was held at Clyst Vale Community College. The event was organised by Living Options Devon and exists to ensure people with physical and/or sensory disabilities and Deaf people with sign language can make an active and equal contribution in society.

Disabled Young People in Mid Devon were asked to take part in a pilot project called Outreach, looking at issues they may have with service provision. As a fitting end to the project they invited young people to an event where they can meet other young people from the area, share their concerns and get some valuable information about the services and opportunities open to them.

There were a wide range of organisations present at the event and they were Connexions, Exeter College, St Loyes College, Devon Welfare Rights, Community Equality Disability Action, DiscPlus. Representing Exeter City FC was myself as ECFC DLO & ECDSA Chairman, Colin Atkins – ECDSA Vice-Chairman, Dick Bedford – ECFC Ability Counts Team plus one of his players and we were glad also to have at the event with us Exeter City players Bertie Cozic and Neil Saunders.

The event was a bit of a washout which was down to the very bad weather but we were still able to inform the organisations present what Exeter City Football Club has too offer as a community club.

It was a great pleasure to meet all the people present at the event and Thanks to Amanda Woolley and her colleagues from the Outreach Project – Living Options Devon inviting Exeter City Football Club and giving us the opportunity to tell everyone what we have too offer. 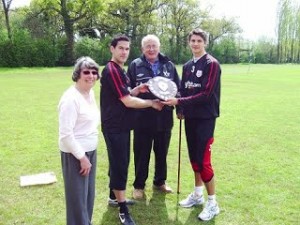 George Friend being presented our Most Improved Player award 2007/08 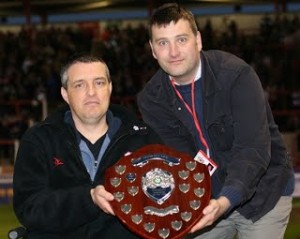 Our Chairman Nick Saunders being presented the ‘Supporter of the Year’ 2007/08 award by Roger-Hamilton Kendall (Exeter City Supporters Club Chairman).

Hello & Welcome to this the first AGM for the Exeter City Disabled Supporters Association.

Some background – In 2002 I joined the Exeter City Supporters Club Committee and became their Disabled Supporters Representative and with the backing of the Supporters Club I set out to change peoples attitudes towards disabled people and to make sure disabled supporters were treated fairly and  in 2003, I became the football clubs Disabled Supporters Representative, Exeter City has come along way since 2002 and I truly believe that attitudes has changed greatly and we are treated fairly.

August 2007 – We welcomed a new committee member. Bertie Cozic was asked and accepted an invitation to become our President. In our first two months we had 16 members. ECDSA was officially launched on the 27th at the Weymouth match with Bertie receiving our first membership.

September 2007 – We sponsor Bertie Cozics sock ties. We took over the payment of membership to NADS (National Association of Disabled Supporters) from the Supporters Club on behalf of ECFC, One of our committee members stands down because of ill health.

October  2007 – Avid city supporter (James Gould) aged 17 was badly paralysed in a freak accident and I was giving a friend of the Gould family and the Gould family help and support and at the same time this was raising the profile of ECDSA and still is.

December 2007 – One of our members passed away and a condolence card was sent to the family. We started to collect supporters used printer ink cartridges for recycling with all funds going to ECDSA and this was still on top of collecting old mobile phones. Committee member (Les Knight) kindly donated five sets of waterproofs for our disabled supporters that use disabled area 5 in the Big Bank Stand as this area is exposed to the rain. We welcomed a co-opted member to the committee to help us understand the issues that Blind & Partially Sighted Supporters may have plus Exeter City FC were working closely with RNIB on setting up the Soccer Sight Project at Exeter City which includes Vi Football and the installation of a Dedicated Vi Match day Commentary Service.

January 2008 – Vice-Chairman Colin Atkins had arranged to do a raffle and some committee members offered to get extra prizes for the draw, we had a very successful bucket collection at the Oxford United match and 50% was going to the James Gould Trust. Two of our wheelchair supporters were poorly treated at our away match at Torquay United and I had taken the matter up with the Devon FA / FA Conference and NADS (National Association of Disabled Supporters).

February  2008 – We handed over £***.** to the James Gould Trust from our bucket collection. Myself and Colin Atkins represented ECDSA & ECFC at the Disability Equality Seminar which was held at Wembley Stadium and we (ECDSA) were the only association made up of volunteers only. Les Knight became our Press Officer. I became Disability Liaison Officer instead of Disabled Supporters Representative for the football club.

March 2008 – Myself, Colin Atkins, City Players Bertie Cozic and Neil Saunders plus Dick Bedford and one of his players from the Ability Counts team attended a Disabled Young Peoples event held at Broadclyst Community College on behalf of ECDSA & ECFC and in which was a great opportunity to get publicity for ECDSA & ECFC as a community club. ECFC with the RNIB (Soccer Sight) launches the dedicated Vi match day commentary service.

April 2008 – Raffle draw went very well on the 12th. We have 31 members which is great for our first year, compare that with the DSA at Liverpool FC which has been going for 3 years and has only 100 members. Committee member (Steve Gazzard) donated a Shield for the Most Improved City Player which was won by and presented to George Friend for a great season. We had bricks included in the Exeter City Brick Scheme with the wording ‘ECFC Disabled Supporters Association’ which is located the club shop side of the new education centre. We’re getting a Portable Induction Loop for our Hearing Impaired supporters to be used in the club shop and club offices and will be in place before the new season.

As you can tell It’s been a very busy first year for ECDSA and what an amazing year it’s been, who would of thought that in our first year our football club would get promoted back into the football league beating Torquay United in the Play-off semi finals on the way and myself being voted ‘Supporter of the Year’.

Finally, I would like to thank all the committee who have given up their time and have worked so hard for the benefit of our disabled supporters and thanks also goes out to all our members for their support throughout the year, Exeter City Football Club for allowing us to use the facilities for our meetings and Bertie Cozic for being a great President.

Many thanks to you all for coming along this evening and thank you for listening!
Nick Saunders, ECDSA Chairman